There are 3 kinds of essays: argumentative (usually called «opinion essay»), discursive (similar to an objective scientific essay) and descriptive essay. How to distinguish the kinds of essay you are told to write? It depends on the statement of your exam:

Differences between Discursive and Argumentative Essays

Essays are usually written in continuous, flowing, paragraphed text and don’t use section headings. This may seem unstructured at first, but good essays are carefully structured.

The essay itself usually has no section headings like the reports, but they do have a titple.

You should aim to restrict your introduction to information needed for the topic and only include background and contextual information which helps the reader understand it, or sets the scene for your chosen focal points. You will be expected to demonstrate your ability to select the most relevant content to address your/experts’ focal points.

Below are examples of an opening statement, a summary of the selected content, and a statement at the end of the introduction which tells the reader what the essay will focus on and how it will be addressed. We’ve use a fictional discursive essay.

The title of our essay is: ‘Cats are better than dogs. Discuss.’

People have shared their lives with cats and dogs for millennia. Which is better depends partly on each animal’s characteristics and partly on the owner’s preferences.

The following specific topics selected for the essay will he examined:

Example of closing statements at the end of the introduction:

This essay will examine both cats’ and dogs’ behaviour and abilities, the benefits of keeping them as pets, and whether people’s perceptions of their nature matches current knowledge and understanding.

The body of the essay should be organised into paragraphs. Each paragraph should deal with a different aspect of the issue, but they should also link in some way to those that precede and follow it. This is not an easy thing to get right, even for experienced writers, partly because there are many ways to successfully structure and use paragraphs.

The theme or topic statement

The first sentence, or sometimes two, tells the reader what the paragraph is going to cover. It may either:

It should be clear if the point has come to an end, or if it continues in the next paragraph.

Here is a brief example of flow between two summarised paragraphs which cover the historical perspective:

It is known from hieroglyphs that the Ancient Egyptians believed that cats were sacred. They were also held in high regard, as suggested by their being found mummified and entombed with their owners. In addition, cats are portrayed aiding hunters. Therefore, they were both treated as sacred, and were used as intelligent working companions. However, today they are almost entirely owned as pets.

In contrast, dogs have not been regarded as sacred, but they have for centuries been widely used for hunting in Europe. This developed over time and eventually they became domesticated and accepted as pets. Today, they are seen as loyal, loving and protective members of the family, and are widely used as working dogs.

There is never any new information in a conclusion.

The conclusion usually does three things:

The conclusion should usually occupy just one paragraph. It draws together all the key elements of your essay, so you do not need to repeat the fine detail unless you are highlighting something.

A conclusion to our essay about cats and dogs is given below:

Both cats and dogs have been highly-valued for millennia, are affectionate and beneficial to their owners’ wellbeing. However, they are very different animals and each is ‘better’ than the other regarding care needs and natural traits. Dogs need regular training and exercise but many owners do not train or exercise them enough, resulting in bad behaviour. In contrast, cats do not need this level of effort and care. Dogs are seen as more intelligent, loyal and attuned to human beings, whereas cats are perceived as aloof and solitary, and as only seeking affection when they want to be fed. However, recent studies have shown that cats are affectionate and loyal and more intelligent than dogs, but it is less obvious and useful. There are, for example, no ‘police’ or ‘assistance’ cats, in part because they do not have the kinds of natural instincts which make dogs easy to train. Therefore, which animal is better depends upon personal preference and whether they are required to work.

How to structure your writing

When you turn over the paper and begin your writing, take some time to read the task instructions. Identify all parts of the question, underlining which parts are obligatory and noting which parts are optional. Make a brain storming of  the key words and their synonyms and of the arguments you are going to use.

Imagine you have to write an essay about allocating money from local authorities. You have to discuss and decide whether museums, sports centres or public gardens should be invested those sums. Take a look at this fictional statement. 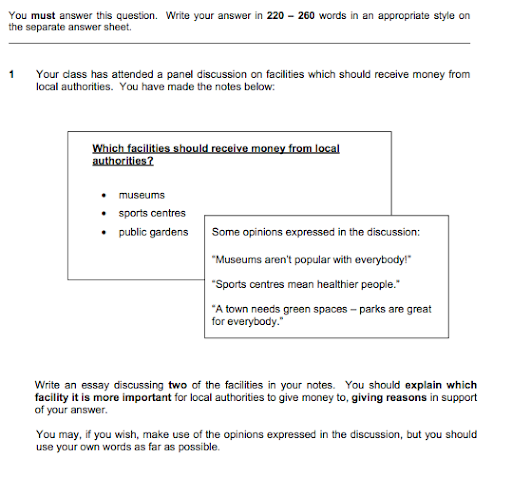 Remember, you don’t have to use the opinions expressed in the box, but they may help you to get the ball rolling. Also, you only have to talk about two of the options given, not all three.

Take ten minutes to lay out your ideas. Make a pros and cons list for each of the three options and then decide which two you feel most confident with. Here’s some things you might come up with. 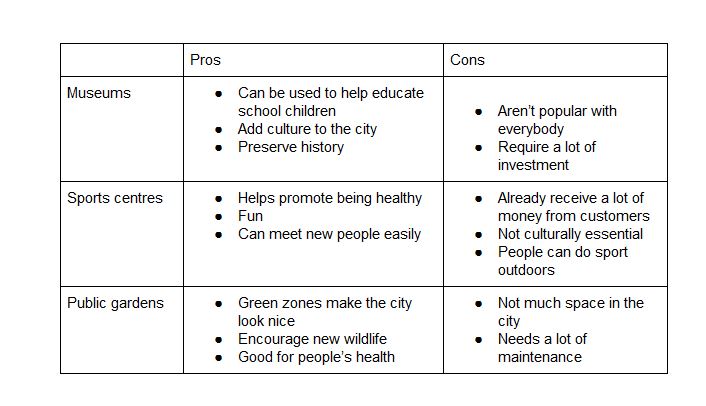 This is an advanced piece of writing, so make sure your choice of language reflects it. You will get marked for accuracy, however, occasional errors can still be present as long as they do not impede understanding. So don’t play it too safe. This is your opportunity to show what you can do, so take some risks and have fun with it! You would need to use:

In the writing paper you should use a range of vocabulary, including less common lexis. Brainstorm some vocabulary related to the topic. Take your time to think of nouns and compound nouns that you know at C1 level. Really let your vocabulary sparkle. 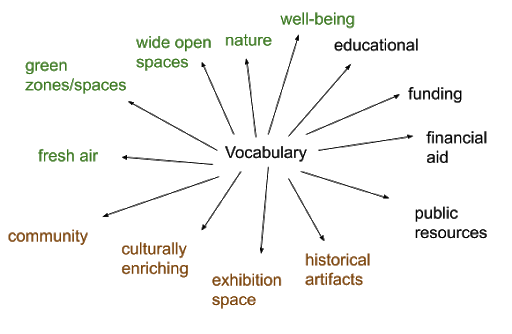 No one likes a broken record. Find synonyms for simple words. You want to use a variety of language, and try not to repeat yourself too much. Check out these different ways of saying the same thing:

Essays can be considered a journey from the introduction to the conclusion. You’re the driver, your readers are the passengers, and signposts are the roads you choose to take.

Not signposting your essay is a bit like sleeping on a journey and only waking up. You’ll wonder where you are and how you got there. Your examiner can feel this way if your content isn’t clearly signposted.

The examples below are suggestions and you don’t need to reproduce them exactly; each word and phrase has a precise meaning so you should check their meaning before you use them. Most of these terms can be used in any section of an essay, but some will suits particular fields more than others.

Signposting means using words to tell your reader about the content of your essay to help them understand as clearly as possible. Here are three examples of signposts and what they mean:

You can signposting using single words, short phrases, long phrases, or whole sentences. Examples of each are provided below:

These lists include some terms you could use for signposting in your introduction, main body and conclusion.

Signposting in the introduction

You could use an opening statement like this to signpost your introduction:

Several matters regarding……will be (verb in past participle)/This essay will:

Then it would be… (verb in past participle)/It will then:

To quantify what your essay will do, you could say: ‘This essay will address three aspects’. You could also signpost how this will be done, for example: ‘This essay will attempt to determine whether cats are better pets than dogs by analysing studies of their behaviour.’

Signposting in the body

These examples show a word or phrase and what it tells the reader:

Signposting don’t always have a statement of intent (like ‘It will then’, or ‘In addition’). You could say: ‘Cats are often seen as less affectionate than dogs’.

You can use many terms and phrases from the introduction and main body of your essay in the conclusion too, but not all of them are appropriate. You shouldn’t introduce new material in a conclusion and can use the past perfect tense (‘This essay has focused on’) or present tense (‘This essay shows that’). Instead you could say:

Whenever the issue of the benefits and harms of videogames has been brought up, the responses are always controversial. The importance of this subject is derived from its popularity amongst the masses, most significantly in children of the ages of 11-16. There is a vast amount of debate and discussion as to what this constitutes, what its consequences are, how serious it is and whether it should be classed as a physiological disorder. If these children are going to make up the next generation, it is imperative that we investigate the effects they have. This essays will go to explore these matters.

On the one hand, the incentive people have to play videogames stem from the idea that they are real-life simulations from the graphics and sound to the interactivity. In addition to this, the game developers are employing a new strategy in order to attract customers: they claim, while backed up by doctors and researchers, that they have medical benefits.

This is, however, in the midst of research and claims linking videogames with violence, headaches, nerve and muscle damages and even obesity in the long run. This would apply to almost any other activity which involved computers and the television.

The arguments go further. Experts claim that videogame addiction is as serious as the likes of alcohol addiction due to the compulsive element that it entails. One of the studies which support the existence of this addiction stated that addicted adolescents spend more time playing video games and are likely to have more fights with friends and more arguments with teachers. Likewise, addicted teenagers reported lower academic grades. It is clear from the studies which have taken place as well as first hand reporting that videogame addiction exists, is a serious problem, and impacts the victim in their lives due to their neglect for ordinary day-to-day duties.

Lastly, it is important we acknowledge that there are always exceptions presenting examples of extreme reactions. Many players are not at all affected even after playing violent games for hours on end. What is clear, nonetheless, is that the majority of people are affected negatively by videogames due to its overuse. The solution to this, in my opinion, is the job of parents: it is their duty to balance their children’s time with videogames with other activities such as homework. In addition, it is their responsibility to monitor the content of the games and talk to their children about the behaviour they witness when playing. If these simple guidelines were followed most individuals would not be affected negatively by videogames whether it is violent behaviour or addiction.